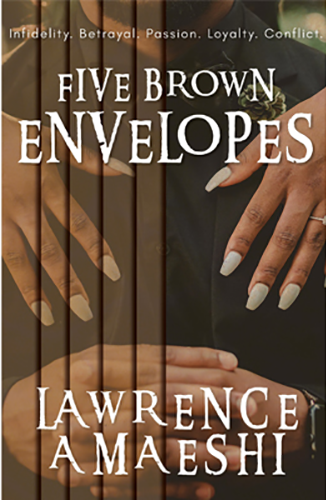 Nduka “Kaka” Kabiri’s company is in trouble. A legacy inherited from his late father, Construction Lions Limited will be liquidated after their multi-billion-dollar project in Northeastern Nigeria is seized and destroyed by terrorists.

To save his company, Kaka’s bid must win a World-Bank- sponsored rail project tender. This contract will pay off all his debt and make Kaka one of the richest men in Africa. The stakes are high, and greedy, powerful, dangerous men in the corridors of power—and some close enough to walk the corridors of his own home—will do anything to stop Kaka from winning the rail tender.

Things become dangerous for him when a beautiful seductress, Tsemaye, appears. She is followed in sequence by five brown envelopes whose mysterious contents threaten to destroy his young family, ensuring that he may lose more than just the rail tender. Five Brown Envelopes is a gripping thriller in the tradition of Jeffrey Archer and Richard North Patterson.

Be the first to review “Five Brown Envelopes” Cancel reply