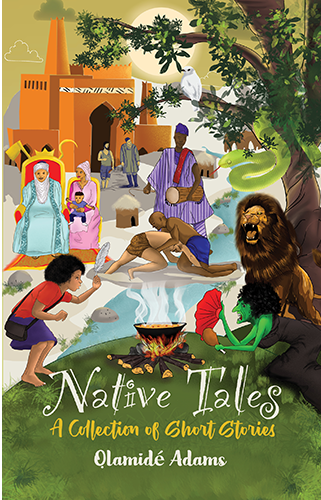 In Olamidé Adams’ Native Tales: A Collection of Short Stories, a spinster in Iliya must dance bare in the market square to save the king from dying; an unlikely but kind young boy got mysterious strength, during a wrestling bout, to defeat and crush the pride of a feared wrestler in Agbor; a drummer learnt to take care of his magical talking drum and together, they saved the land of Ibadan from a dispute that almost divided the kingdom; a young and brave girl in the land of Igbeyinadun journeyed where no man had succeeded in quest of a remedy to heal her sick mother and one of two childhood friends from Esanogbogun remained faithful to their years-long-amity unlike the other who was selfish and eventually got paid in his own coin. All these stories resonate the value that hallmarks heroes, selflessness in service to others.

Be the first to review “Native Tales” Cancel reply