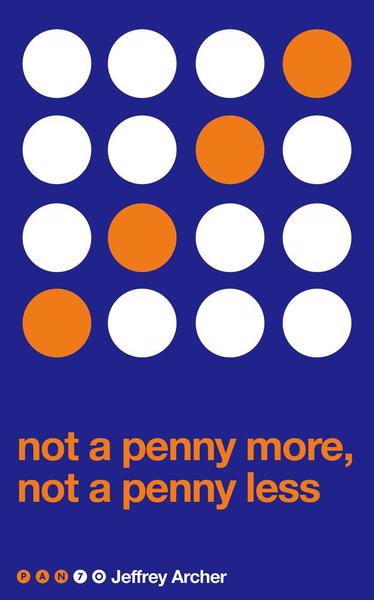 A special edition of Not a Penny More, Not a Penny Less by Jeffrey Archer reissued with a bright retro design to celebrate Pan’s 70th anniversary.

One million dollars – that’s what Harvey Metcalfe, lifelong king of shady deals, has pulled off with empty promises of an oil bonanza and instant riches. Overnight, four men – the heir to an earldom, a Harley Street doctor, a Bond Street art dealer and an Oxford don – find themselves penniless. But this time Harvey has swindled the wrong men. They band together and shadow him from the casinos of Monte Carlo to the high-stakes windows at Ascot and the hallowed lawns of Oxford.

Their plan is simple: to sting the crook for exactly what they lost – not a penny more, not a penny less.

Jeffrey Archer’s first novel, Not a Penny More, Not a Penny Less, is a page-turning tale of fraud, revenge and determination as four men stop at nothing to get back what was stolen from them.

Be the first to review “Not A Penny More, Not A Penny Less” Cancel reply