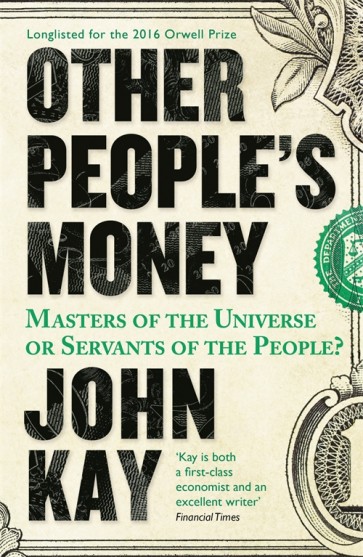 Masters of the Universe or Servants of the People?

Shortlisted for the Orwell Prize 2016

We all depend on the finance sector. We need it to store our money, manage our payments, finance housing stock, restore infrastructure, fund retirement and support new business. But these roles comprise only a tiny sliver of the sector’s activity: the vast majority of lending is within the finance sector. So what is it all for? What is the purpose of this activity? And why is it so profitable?

John Kay, a distinguished economist with wide experience of the financial sector, argues that the industry’s perceived profitability is partly illusory, and partly an appropriation of wealth created elsewhere – of other people’s money. The financial sector, he shows, has grown too large, detached itself from ordinary business and everyday life, and has become an industry that mostly trades with itself, talks to itself, and judges itself by reference to standards which it has itself generated. And the outside world has itself adopted those standards, bailing out financial institutions that have failed all of us through greed and mismanagement.

We need finance, but today we have far too much of a good thing. In Other People’s Money John Kay shows in his inimitable style what has gone wrong in the dark heart of finance.

Be the first to review “Other People’s Money” Cancel reply